The lack of racial diversity among models in the fashion industry imposes various Eurocentric ideologies on current beauty standards and trends. Aspirational designers with ‘far-reaching aesthetic influence’ need to understand their social responsibility and that their influence extends far from the runway (The Washington Post). Models are the public face of the fashion industry and are ‘responsible for embodying the anonymous ideal of the brand — its notion of beauty and desirability’ (The Washington Post). Essentially fashion houses have the power to assert and declare which ‘look’ is most beautiful this season. We must then question the affects of fashion houses neglecting to cast models of colour. In this past Fall/Winter season only 77.6% of models were white. While some designers will cast a ‘token’ model of colour, others simply neglect to cast any model who isn’t white. Demna Gvasalia, we’re looking at you.

Although Gvasalia is not the only designer who is guilty of a whitewashed runway, I have decided to focus my work of visual activism on him and his work at Vetements and Balenciaga. As a designer that has been deemed ‘revolutionary’ and ‘at the forefront of cool’, many critics have turned a blind eye to his shameful casting (Business of Fashion). Doreen Small, former vice president of Ford Models attempted to say that designers look for models with whom their customer can relate as an explanation for the current lack of diversity (Entwingle and Wissinger 185). However, this is an outdated view as there is more diversity among luxury fashion consumers than there ever has been, with the fastest growing market being the Middle East and Africa (Business of Fashion). Essentially designers send the message to their diverse customer base that they don’t see them as part of their world (NY Mag). The fashion world and the runway will always be a place of aspiration and dreams. That’s part of it’s appeal but it doesn’t mean it can’t embody a more racially diverse image.

The work I have created is designed to be the visual element of a social media campaign titled ‘Call out Casting’. The idea is that it puts the power in the hands of the people to ‘call out’ designers. The campaign consists of a square format graphic image with some text designed to fit the Instagram platform. The image is bold and graphic so as to grab the attention of those scrolling through Instagram. The illustration depicts four looks, two from Vetements and two from Balenciaga FW16. They are intended to be recognisable so as to draw attention to these brands in particular. The faces have been purposefully left blank so as to show the absence of minority identities on the runway. The image is able to be reposted by any Instagram user with an editable caption. Users have the option to tag specific designers in their post so as to gradually gain the designer’s attention as the campaign continues. ‘Visual Activism is the interaction of pixels and actions to make change’ (Mirzoeff 297). A hashtag accompanying the image allows the campaign to grow, spark discussion and ignite change. 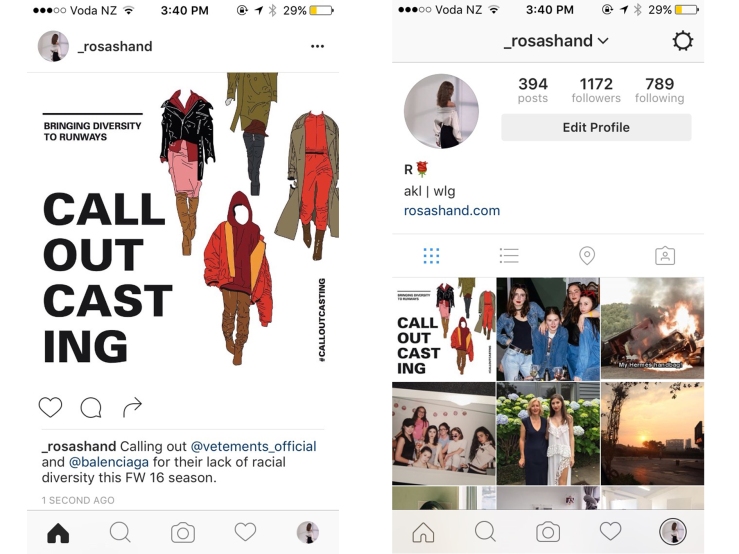